Home / All Blog Posts / Don’t Let This Word Define You

Don’t Let This Word Define You

You’ve probably heard that Facebook COO Sheryl Sandberg, author of Lean In, the popular advice book for women, doesn’t like the word bossy.  In fact, she’s so irate that she’s trying to start a movement to ban the use of the word.  According to Sandberg and a few other women—Condoleezza Rice and Beyonce among them– the word bossy “disproportionately describes young women, damaging their confidence and desire to pursue leadership positions.”  Here’s my take:  don’t waste time trying to ban the word; rather, teach your girls to embrace it.  For example:  “If you mean I know what I want and have some ideas for getting there—something we might call leadership—then go ahead and call me bossy.”  Or, “ Do you mean I’m competent and getting things done?  Well, you’re right!” 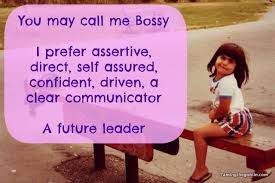 I’m not denying that the word is intended to denigrate females.  In fact Google Analytics reports that women are called bossy 1.5 times more than men.  The word, however, doesn’t have to define you.  It loses its power when it’s embraced.  What’s that old expression, “sticks and stones may break my bones but words/names will never hurt me.”  Let’s face it:  women are still working in a world where we are, for the most part, in the minority, and being called bossy is probably the least harmful of descriptors you’ll encounter.  (There is another B word, you know.) If being called bossy wipes you out, well, you need to develop some backbone and learn to laugh it off. If being called bossy refers to your inflicting hurt to others, however, back up!  That’s a very different story and should be taken seriously.  Otherwise, remember:  True strength is being bossy in a way that empowers others to greatness, not to degradation. (J. Nance)