Home / All Blog Posts / Leading from Behind 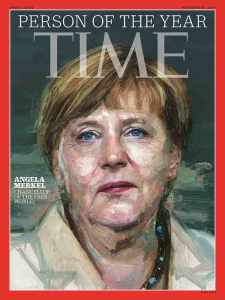 “At a moment when much of the world is once more engaged in a furious debate about the balance between safety and freedom, the [German] Chancellor [Angela Merkel] is asking a great deal of the German people, and by their example, the rest of us as well. To be welcoming. To be unafraid. To believe that great civilizations build bridges, not walls, and that wars are won both on and off the battlefield.”

I was curious that this woman, who seldom steps forward on the internationational stage, was selected by Time Magazine as its Person of the Year.  I had to know more.  What I’ve discovered is an intelligent, thoughtful leadership style:  leading from behind.

Merkel has been described as having a plodding, patient style, looking at the larger picture, working the system and seeking consensus.  It’s said that she studies a problem to its foundations, gathers as much data as possible and asks endless questions.

Like a chess player, she has a record of scanning the globe from a high altitude, focusing intently on dangers not yet apparent to others.  She doesn’t react to in-your-face crises but considers the whole situation.  “Fear has never been a good adviser,” she says.

At a time when words are used as daggers to define and confine others, it is inevitable that fear threatens to consume us.  Is it possible to consider the larger circumstances of our lives and not fall into the labyrinth of fear?  To take our time, consider what’s in front of us, and maintain our values of openness and democracy and the belief that these values will prevail.  We must try.

Good thoughts for the new year,