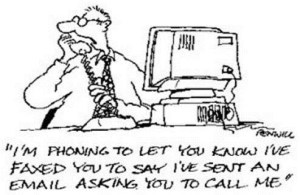 Everyone knows how dependent we all are on e-communications. The computer, the emails, Facebook, twitter and more. I like the ease of these communications but I’m aware that I simplify what I’m thinking or feeling when I communicate in this way. Analysts and psychologists warn against spending so much time online, saying we’re missing the non-verbal and emotional connections that take place when we talk face-to-face. I appreciate this and always prefer to spend time with friends in person, rather than online. Besides, we can drink wine when we’re together and it’s never much fun to drink alone. (Apologies to all my tee-totaler friends.)

But, what to do when the online connection stops or falls apart? My friend Jean has had several problems with one online company, which will remain nameless, with her email going out five or six times over the past year. She can’t communicate, either by email or cell phone when this happens. She called me on her land line today to let off some steam. Luckily she had the phone number of the provider. She no longer has a phone book. Neither do I. Do you? When one is dropped off on my porch, I toss it because the print is so small I can’t even read it with my bi-focals.

Jean called the provider to complain and the representative said, “well if you purchase a higher mega-bite from us, you wouldn’t have the problem. (I hope I said that right: mega-bite?). Jean lost it. “You’re telling me you’ve created a problem so that you can solve it by getting more of my money? No way! ”   She’ll spend today trying to get things straightened out, without paying more for the service.

I’d love to know how you’ve handled these situations. I could tell you more about my own experience, but I’ll save it for later. For sure, whether it’s helpful or harmful in the long run, social media has secured quite a hold on the ways in which we communicate with one another—and it seems as though it’s here to stay.  The times, they’ve been a’changin’….