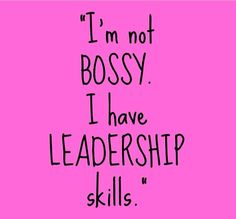 I’ve been thinking about words.  The word “bossy,” for example, is one I hear frequently.  Friends and colleagues use it — humorously, they say — to describe my leadership style.  I usually go along with the humor of it; after all, at my age,  I’m comfortable  with the way I am and the way I lead.  That is, I have been until I heard a discussion recently on NPR about how the word is never used to describe men.  Have you ever heard about bossy men?  Men are called assertive or bold or confident or are described as “knowing what he wants.”  Does this mean that when a woman knows what she wants, she is confident…or is she being bossy?  Bossy is just one of those words we use to describe women who are goal oriented.  My uncle Bill, upon meeting my significant other, said, “Now John, if you’re going to be part of this family, you’d better learn to say yes, dear.   The women in this family are pretty bossy.”  My aunt Shirley turned and looked at the two men and asked, “You have a problem with that?”  Just a thought:  sometimes we need to think about the words we use.  Your thoughts?  Are you a bossy leader?